What to expect when visiting our Church

In fact, when you came in the service was already going on, although the sign outside clearly said "Divine Liturgy, 10:00 a.m."What's going on here?

In an Orthodox church there is only one Eucharistic service (Divine Liturgy) per Sunday, and it is preceded by an hour and a half service of Matins (or Orthros). There is no break between these services-one begins as soon as the previous ends. Matins is a preliminary service celebrating the goodnews of Resurrection of Christ which make the liturgy possible which follows.

Orthodox worshippers arrive at any point from the beginning of Matins through the early part of the Liturgy, a span of well over an hour. Of course, there is still no good excuse for showing up after 10:00, but punctuality is unfortunately one of the few virtues many Orthodox lack. 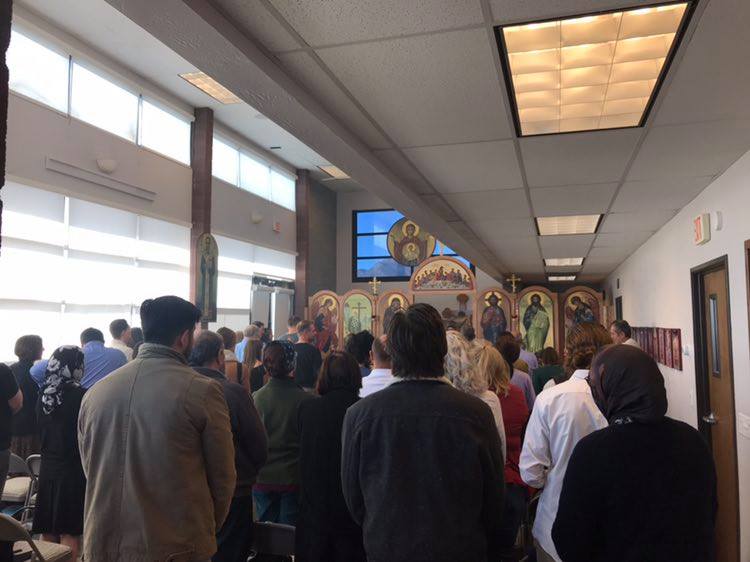 2. We Stand When We Pray
In the Orthodox tradition, the faithful stand up for nearly the entire service. The reason for this is that we understand worship to be work. Sitting is a form of rest. We believe that when in the presence of God we should all stand. If you find the amount of standing too challenging you're welcome to sit at any time.

The liturgy at Holy Cross begins at 10:00 AM. By 10:20 AM we hear the reading of the Epistle (everyone sits) and then the Gospel lesson for the day is read (everyone stands). Following this, sometimes a sermon is given or the priest will give a sermon after Divine Liturgy. The liturgy continues until 10:55 AM when Communion is given and the service continues until the conclusion of the liturgy around 11:15 AM. Following the announcements the adult sermon is given and Church is dismissed around 11:30 AM 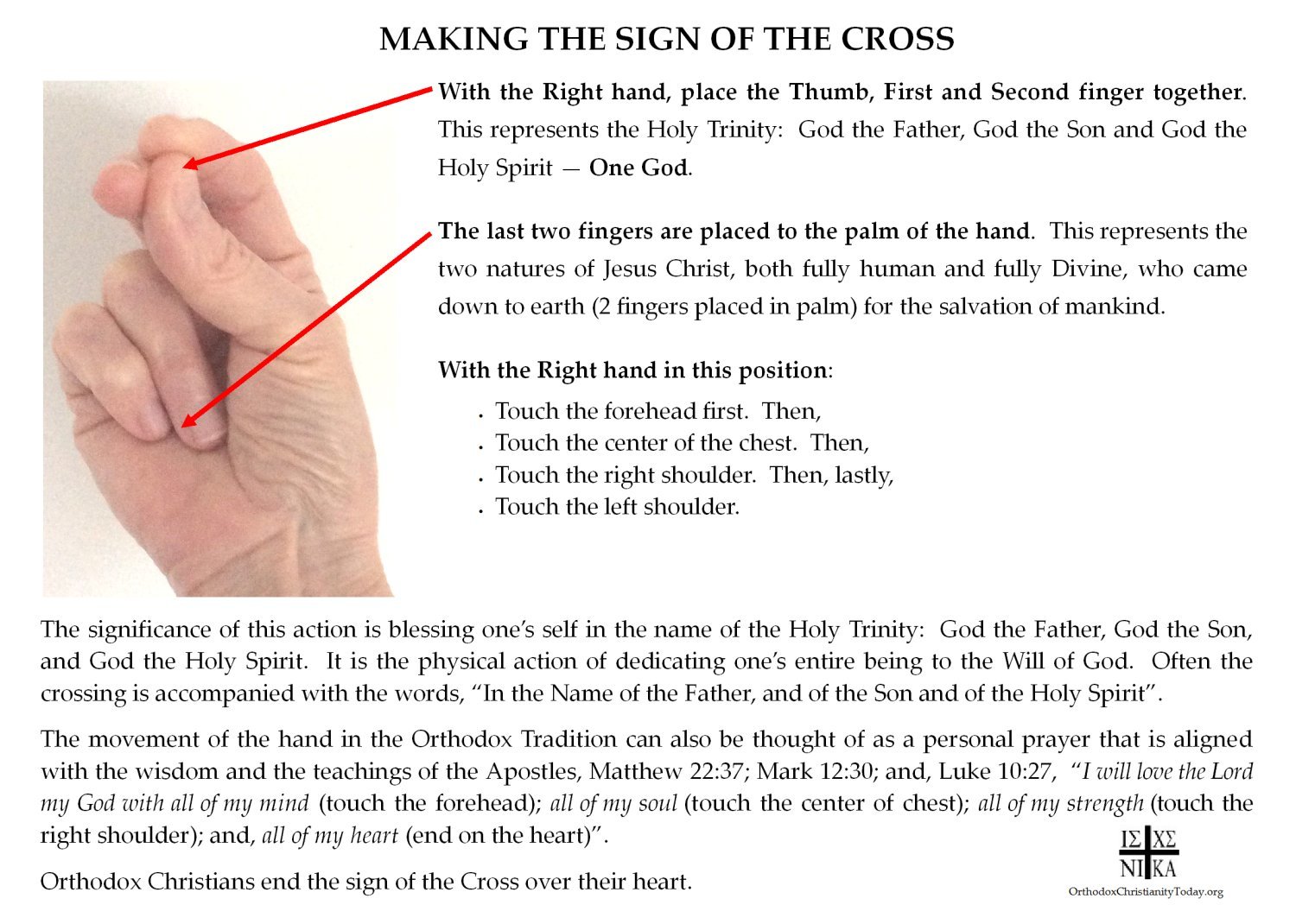 3. People Make the Sign of the Cross
We sign ourselves whenever the Trinity is invoked, whenever we venerate the cross or an icon, and on many other occasions in the course of the Liturgy. People however,  aren't expected to do everything the same way. Some cross themselves three times in a row, and some finish by sweeping their right hand to the floor. On first entering a church people may come up to an icon, crossing themselves and bowing with right hand to the floor, then kiss the icon, then make one more bow. This becomes familiar with time, don't worry, you don't have to follow suit.

4. Orthodox People Venerate
When we first come into the church, we kiss the icons. You'll also notice that some kiss the chalice, some kiss or touch the edge of the priest's vestment as he passes by, the acolytes kiss his hand when they give him the censer, and we all line up to kiss the priest's hand at the end of the service as we recived th eblessed bread. When we talk about "venerating" something we usually mean crossing ourselves and kissing it.

We greet each other before we take communion ("Greet one another with a kiss of love," 1 Peter 5:14). The usual greeting is "Christ is in our midst" and response, "He is and shall be." Don't worry if you forget what to say. Exchanging the "kiss of peace" is a liturgical act, a sign of mystical unity. Chatting and fellowship is for later.

Only Orthodox may take communion, but anyone may have some of the blessed bread offered at the conclusion of the liturgy. As we file past the priest, we come to an altar boy holding the basket of blessed bread. People will take portions for themselves and for visitors and non-Orthodox friends around them. If someone hands you a piece of blessed bread, do not panic; it is not the eucharistic Body. It is a sign of fellowship.

Visitors are sometimes offended that they are not allowed to receive communion. Orthodox believe that receiving communion is broader than me-and-Jesus; it acknowledges faith in historic Orthodox doctrine, obedience to a particular Orthodox bishop, and a commitment to a particular Orthodox worshipping community. There's nothing exclusive about this; everyone is invited to make this commitment to the Orthodox Church. But the Eucharist is the Church's treasure, and it is reserved for those who have united themselves with the Church. An analogy could be to reserving marital relations until after the wedding.

We also handle the Eucharist with more gravity than many denominations do, further explaining why we guard it from common access. We believe it is truly the Body and Blood of Christ. We ourselves do not receive communion unless we are making regular confession of our sins to a priest and are at peace with other communicants. We fast from all food and drink-yes, even a morning cup of coffee-from midnight the night before communion.

6. Where's the General Confession?
In our experience, we don't have any general sins; they're all quite specific. There is no complete confession-prayer in the Liturgy. Orthodox are expected to be making regular, private confession to their priest. The role of the pastor is much more that of a spiritual father. He is not called by his first name alone, but referred to as "Father Firstname." His wife also holds a special role as parish mother, and she gets a title too "Presbytera" (Greek), which means "priest's wife."

Another difference you may notice is in the Nicene Creed, which is recited. If we are saying that the Holy Spirit proceeds from the Father, and you from force of habit add, "and the Son," you will be alone. The "filioque" was added to the Creed some six hundred years after it was written, and we adhere to the original. High-church visitors will also notice that we don't bow or genuflect during the "and was incarnate." Nor do we restrict our use of "Alleluia" during Lent (when the sisters at one Episcopal convent are referring to it as "the ‘A' word"); in fact, during Matins in Lent, the Alleluias are more plentiful than ever.

7. Hymnology That Draws Us To Pray
At Assumption, the Choir is meant to lead the people in congregational singing. Traditionally, hymns are sung a capela although most Greek Orthodox churches use organs as well.

8. The Virgin Mary
A constant feature of Orthodox worship is veneration of the Virgin Mary, the "champion leader" of all Christians. We often address her as "Theotokos," which means "Mother of God." In providing the physical means for God to become man, she made possible our salvation.

We honor her, as Scripture foretold ("All generations will call me blessed," Luke 1:48). When we sing "Through the intercession of the Theotokos, Savior, save us," we don't mean that she grants us eternal salvation, but that we seek her prayers for our protection and growth in faith. Just as we ask for each other's prayers, we ask for the prayers of Mary and other saints as well. They're not dead, after all, just departed to the other side. Icons surround us to remind us of all the saints who are joining us invisibly in worship. 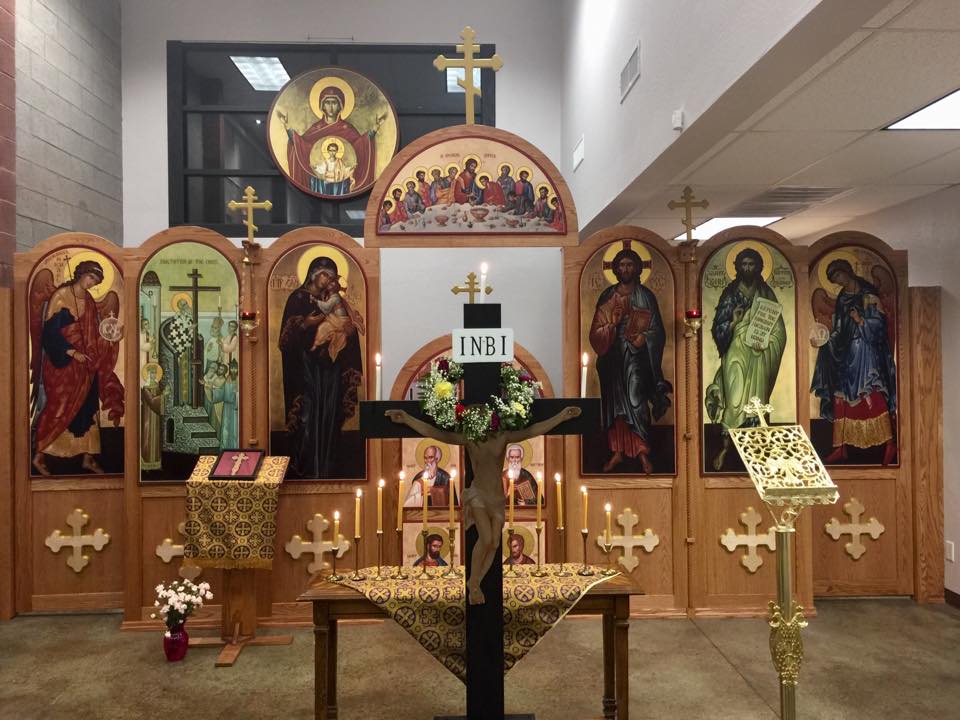 9. The three doors.
Every Orthodox church will have an iconostasis before its altar. "Iconostasis" means "icon-stand", and it can be as simple as a large image of Christ on the right and a corresponding image of the Virgin and Child on the left. The basic set-up of two large icons creates, if you use your imagination, three doors. The central one, in front of the altar itself, is called the "Holy Doors" or "Royal Doors," because there the King of Glory comes out to the congregation in the Eucharist. Only the priest and deacons, who bear the Eucharist, use the Holy Doors.

The openings on the other sides of the icons, if there is a complete iconostasis, have doors with icons of angels; they are termed the "Deacon's Doors." Altar boys and others with business behind the altar use these, although no one is to go through any of the doors without an appropriate reason.

10. Where does a "non-Greek" fit in?
There are about 6 million Orthodox in North America and 250 million in the world, making Orthodoxy the second-largest Christian communion. Orthodox throughout the world hold unanimously to the fundamental Christian doctrines taught by the Apostles and handed down by their successors, the bishops, throughout the centuries. One could attribute this unity to historical accident. We would attribute it to the Holy Spirit.

Currently the largest American jurisdictions are the Greek Orthodox Archdiocese, The Orthodox Church in America (Russian roots), and the Antiochian Archdiocese (Arabic roots). The liturgy is substantially the same in all, though there may be variation in language used and type of music.

Orthodoxy seems startlingly different at first, but as the weeks go by it gets to be less so. It will begin to feel more and more like home, and will gradually draw you into your true home, the Kingdom of God. I hope that your first visit to an Orthodox church will be enjoyable, and that it won't be your last.

(The original "12 Things I wished I'd known..." By Frederica Matthews-Green was adapted here by Fr. Andrew Barakos)