Elevation of the Precious & Life-giving Cross 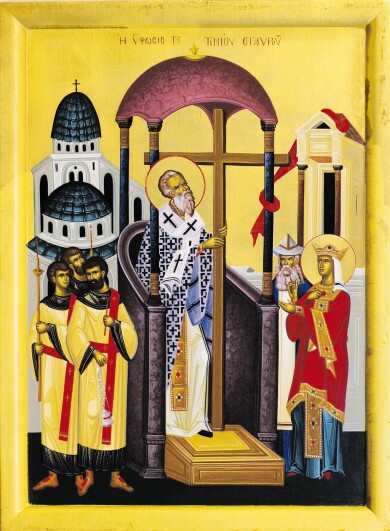 Saint Helen, the mother of Saint Constantine the Great, when she was already advanced in years, undertook, in her great piety, the hardships of a journey to Jerusalem in search of the cross, about the year 325. A temple to Aphrodite had been raised up by the Emperor Hadrian upon Golgotha, to defile and cover with oblivion the place where the saving Passion had been suffered. The venerable Helen had the statue of Aphrodite destroyed, and the earth removed, revealing the Tomb of our Lord, and three crosses. Of these, it was believed that one must be that of our Lord, the other two of the thieves crucified with Him; but Saint Helen was at a loss which one might be the Wood of our salvation. At the inspiration of Saint Macarius, Archbishop of Jerusalem, a lady of Jerusalem, who was already at the point of death from a certain disease, was brought to touch the crosses, and as soon as she came near to the Cross of our Lord, she was made perfectly whole. Consequently, the precious Cross was lifted on high by Archbishop Macarius of Jerusalem; as he stood on the ambo, and when the people beheld it, they cried out, "Lord have mercy." It should be noted that after its discovery, a portion of the venerable Cross was taken to Constantinople as a blessing. The rest was left in Jerusalem in the magnificent church built by Saint Helen, until the year 614. At that time, the Persians plundered Palestine and took the Cross to their own country (see Jan. 22, Saint Anastasius the Persian). Late, in the year 628, Emperor Heraclius set out on a military campaign, retrieved the Cross, and after bringing it to Constantinople, himself escorted it back to Jerusalem, where he restored it to its place.

Apolytikion in the First Mode

Save, O Lord, Your people and bless Your inheritance. Grant victory to Your faithful against the adversaries of the Faith, and protect Your people by Your holy Cross.

Kontakion in the Fourth Mode

Lifted up of Your own will upon the Cross, bestow Your mercy upon Your new community that bears Your Name, Christ our God. Make Your faithful people glad in Your strength, giving them victory over adversaries. Let them have as an ally that invincible trophy, Your weapon of peace.